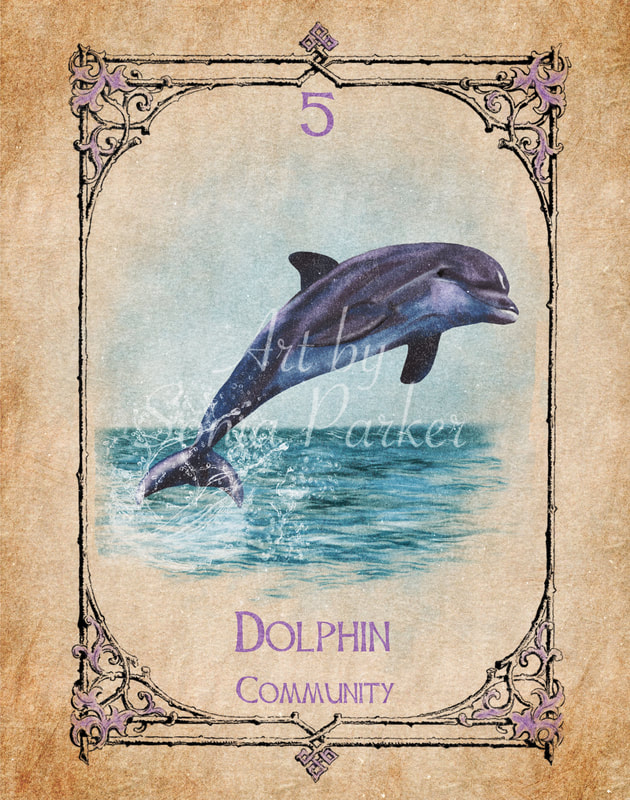 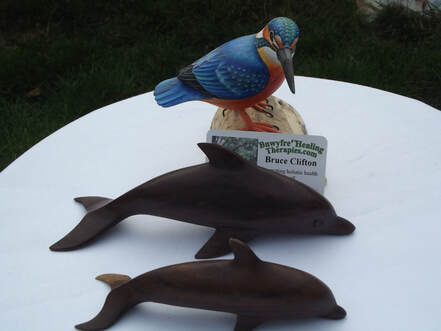 What is the spiritual Meaning of Dolphin?
The spiritual meaning of the dolphin is one of divine femininity, to look at a school of dolphins playing, and we see a community, mermaids, nymphs, an innocence and allure that is not found anywhere else. Dolphins will intuitively play when it is safe, their instinct surpasses all other mammals and so they afford guidance and protection to the chosen few. Dolphins will welcome you into their community that has been established through many lifetimes.

Why does the Dolphin appear now?
The Dolphin will appear and remind us of the innocence in all things, dolphin reminds us not to be cynical. The allure and the song of the mermaid will call strangers onto the rocks, the locals know her call and recognise her warning to stay away from the rocks. Dolphin reminds us of divine intervention, guidance and the innocence in everyday living.

The spiritual meaning of the dolphin is one of divine femininty, to look at a school of dolphins playing and we see mermaids, nymphs, an innocence and allure that is not found anywhere else. Dolphins will intuitively play when it is safe, their instinct surpasses all other mammals and so they afford protection to the chosen few.

To dream of a dolphin and it is offering guidance, to dream of many dolphins and it is you that can offer guidance. A pair of dolphins and you can believe that love is coming. The dolphin represents peace, it offers protection and guidance to all who seek it. The allure of a mermaid is the attraction of the dolphin, the innocence of the nymph is also bestowed. To look from the coast line of Anglesey and you will find the dolphins calling to the druids of yesteryear, they offer solace, comfort and consolation to the last area occupied by the Celtic Druids. Celtic legends and folklore are abound with sea creatures that both help and hinder man, from the islands of Britain, Greenland, Ireland, Manx and from the legends of Lir, Bran and Manannan come stories of the sea and its creatures. To look at Bristol, Glastonbury, Brest and the ships that moved tin and copper between the ports. It is suspected that the dolphins provided escort to our Lord Jesus, to the River God Bran the Blessed, that they assisted Joseph of Arimithea and the entourage that walked our green and pleasant land.

The dream meanings for the dolphin range from emotion to guidance, to spiritual destiny, to circumstance and a path through it to better times. Also socially, the dolphin is a protector who has no ego, so to become a dolphin or imagine oneself as the dolphin it might mean that you are a part of the collective and happy to take the lead whilst also being a part of the whole. A sick dolphin will be looked after by the rest of the pod, enveloped and encouraged back to health. A pod of dolphins range in size from 100s to just 2, to dream of being one of two has obvious connotations with love links etc. but this may also indicate the need to share or the need to break away from a social group.
A solitary dolphin swimming in an ocean is emotion and the feelings of exploration, to break away and explore not just "what is out there" but self and the many shades of self.
Like us the dolphin prefers warmer climates and will actively seek warmer seas and plentiful food, to dream of frivolous dolphins could indicate... "The need for a holiday."

Dolphins like us, naturally care for their own and like us they like to please, are curious and can become stressed. Swimming with Dolphins is a healing taking place for us and them, they need to breathe as we do and can relate to drowning. They will identify when people are challenged and will assist if they can in mind, body and spirit they appreciate our frailties and will help us if we allow them too.

​Aristotle was among the first to recognise that Dolphins were mammals, the ancient Celts, Greeks and Romans recognised that dolphins and humans were similar. It is believed that some cultures held the dolphin so sacred that to kill one was punishable by death. With dolphins ever appearing as happy and smiling they were perceived as joyful saviour of souls and protectors or guardians of the oceans. Many a Nordic ship had a dolphin engraved on its bow, Just as many a Roman ship was lead by the dolphin statue embodied into the helm.  The emergence of the mermaid, and the tales and fables surrounding the dolphin have been linked for as long as man has entered the seas. The playfulness and natural curiosity of the dolphin has inspired fishermen around the world into trusting them and learning from them. It is acknowledged that dolphins will warn of a storm and many a dolphin has warned friendly fishing boats to go back to port by actively pointing the way back and leading them away from the storm. It is a foolish fishermen who ignored a dolphins cry.

​The Dolphin lives to around forty years of age in its natural surroundings, in captivity it will not live as long. It has been around for about nineteen million years and occupies every ocean, it has also evolved and can live in fresh water. The fresh water dolphins are normally named after the river they live in. Dolphins (cows) are pregnant for one year and will nurse their young (calves) for up to six years. these creatures do not sleep, like us their minds remain active. One side of their brain will remain active always and will protect the body, the left side of the brain sleeps with the right side maintaining a vigilance and allowing it to breathe. Then the right side of the brain will sleep and the left will take over, their brain capacity and inteligence is equal to our own but to measure it against ours is unfair and cannot be substantiated.